A new Economist article on “Silver lining:How the digital revolution can help some of the workers it displaces” cites SME president Dr. Michael Mandel on innovation and jobs:

That is a very good thing in the eyes of those who see the rich world’s problems as a matter of too little innovation rather than too much. Michael Mandel, a technology expert at the Progressive Policy Institute, reckons that innovation is generally followed by growth in employment. That is most obviously true in ICT, but also in sectors like energy, where fracking technology has generated an oil boom and a jobs bonanza in states such as North Dakota and Texas. Mr Mandel invites sceptics to imagine a future in which doctors can 3D-print livers (and other organs) on demand—a technology that looks increasingly realistic. In addition to the significant health benefits that would result, organ printing would create new jobs, from workers to monitor the printers to nurses for the patients receiving transplants.

In addition, the same article cites an article that Dr. Mandel did for the Progressive Policy Institute:

E-entrepreneurship received a boost in 2008 when Apple launched its app store, through which third-party software designers could market their own iPhone applications. The “app economy” has since grown by leaps and bounds. According to an estimate by the Progressive Policy Institute, a think-tank, in 2013 it provided work for more than 750,000 people in America alone.

The conventional way to define ’emerging occupations’ is to use the official list of ‘new and emerging’ occupations put out by O*NET, a government-funded source of occupational information.  Unfortunately, that list is mostly composed of many older and unexciting occupations, such as allergists and immunologists, investment fund managers, radiologists, securities and commodities traders, and surgical assistants.  These and many other occupations on the list have been around for many years, and really don’t deserve the term ‘new and emerging’.

Moreover, the O*NET list includes quite a few occupations for which there are currently very few or none job listings nationally. For example, “nanotechnology engineering technician” is on the O*NET list…but as of September 12, there were no want ads nationally for such a job title. The same thing is true for “climate change analyst.”

Conversely, the O*NET list does not include many obvious emerging occupations such as social media and digital marketing. Notably missing, in addition, is anything to do with mobile, wireless, smartphones, or app developers.

So we do not use the O*NET list. Instead, our definition is that an emerging occupation is new enough that it has not yet developed clear career paths or clear job titles. In other words, it’s hard to tell from a job title whether you are appropriate for the job. Moreover, in an emerging occupation, you can expect to have to help define your job yourself, even after you have started.

Take “information security specialist,” an ever-more important job in today’s world of nasty data thefts and perpetual attacks on corporate IT systems. Just to look at the title, you have no idea whether you would be better off with a coding background, or a criminal justice background. After all, given that many data break-ins are based on social engineering, the latter might be more important than the former, depending on the job.

Information security specialist is a classic example of an emerging occupation, where the nature of the job is in so much flux that it has outrun the job title.

In a future post, I’ll describe how one searches for a job in an emerging occupation.

I’m going to be at St. John’s University in New York on Tuesday, September 9, speaking on “New York, New York: Careers in the Big Apple.” Preparing for that talk, I did some comparisons between the NYC labor market and the rest of the country. Here’s one teaser: I looked at online help-wanted ads that contained the term “video production.” What I found is that New York City had 297 want-ads containing the term “video production,” more than double the 137 want ads in Los Angeles.

The demand for digital marketing jobs continues to grow. Based on data from Indeed.com, and we see that ads that contain the term “digital marketing” are a rapidly rising percentage of all want ads (below). That accurately reflects the shift in the labor market towards jobs that have a direct or indirect connection with the data-driven economy. Every major company which has a consumer-facing or business-facing marketing presence–which is pretty much every company–needs digital marketing experts. It’s worth noting that in a city like New York, want ads that contain the phrase ‘digital marketing’ amount to 1.2% of all ads, close to the 1.5% looking for accountants.

This chart probably under-represents the demand for digital marketers, since the field is so new that job titles have not yet been standardized.

In the new SME report, “London: Digital City on the Rise,” we note that

the tech/info sector in the combined London-East-Southeast region is growing faster than California, even taking into account the rapid growth of San Francisco.

Below is a chart that shows the difference. Between 2009 and 2013, tech/info employment rose by 11.4% in the combined London-East-South East regions of the UK, compared to an 8.8% rise in California. If we add in the computer and electronic products manufacturing industry into California’s total, that reduces the state’s growth rate even further. 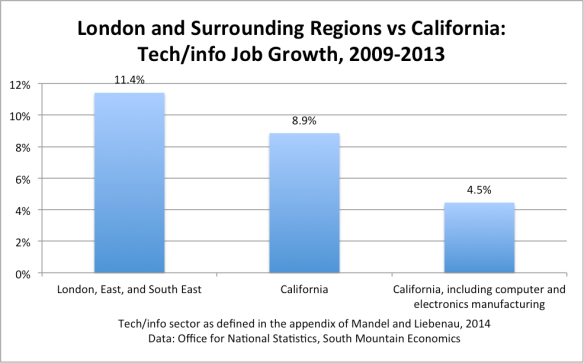 There are two factors explaining this result. First, the tech/info sectors in the East and South East regions are actually growing quite smartly. At the same time, the tech/info sector in the Los Angeles metro region has been lagging globally, showing only a 2.9% growth from 2009 to 2013.

We regularly write about the evolution of journalism (our last post can be found here). Perhaps not surprisingly, there are two separate trends. First, employment of “news analysts, reporters, and correspondents” was up 7% in 2013, continuing its rebound from losses in the Great Recession. 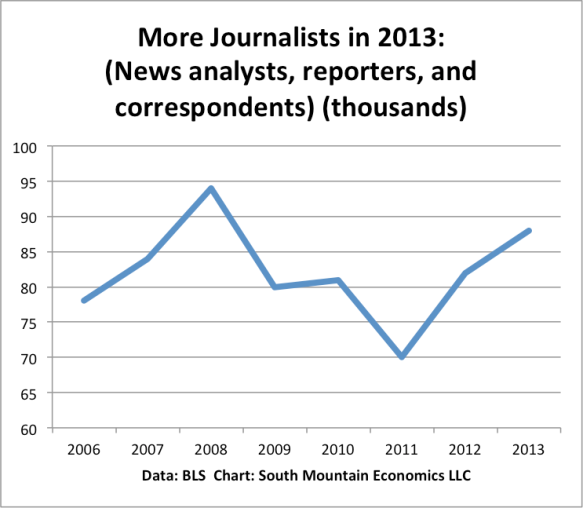 At the same time, the number of editors continued to fall, down about 6% in 2013.  True, not all editors are in journalism. Still, these figures suggest a pattern…more journalists who actually generate content, fewer editors to process that content before it goes online.

As part of our paper on the New York City tech/information sector, we analyzed help-wanted ads in order to  a preliminary estimate of the size of the “Big Data” Economy in New York and the whole country. Our preliminary estimate is that today, the Big Data Economy includes roughly 450,000 workers nationally. That includes tech workers with Big Data skills; supporting personnel in the same companies (marketing, accounting, HR, legal, and so forth); and a conservative estimate of spillover jobs produced in the rest of the economy.*

Judging by these preliminary estimates, the Big Data Economy is one-third smaller than the App Economy. Still, 450K jobs is quite significant . We will be sharpening up this estimate in the future, and perhaps doing a geographical analysis as well.

Can you prosper by choosing a ‘creative’ occupation? Many young Americans are naturally drawn to creative occupations, such as artists, designers, entertainers, sports, and media workers.   (yes, I know that sports don’t seem to  belong there, but that’s how BLS breaks out the workforce).  These occupations seem to be both more interesting and less susceptible to foreign competition.

These occupations make up part of what urban studies expert Richard Florida called the creative class.    The problem:  Many Americans working in these creative occupations lost their jobs during the early stages of the crisis.  Panicked corporate execs saw little need for designers or artists when the world seemed to be collapsing.

But now creative workers have something to rejoice. Employment in arts, design, entertainment, sports, and media professions has  exceeded 3 million for the first time, and finally gone above pre-crisis levels. This is not a mere flash in the pan. If we look at 12-month moving averages, we see the same pattern, where  employment in the creative occupations has finally decisively climbed above their previous peaks.

In future blog items, I will delve more deeply into the details of this recovery. But it may be that ‘creative’ is finally starting to pay off.

Added: Want ads for these creative occupations are up 12.8% over the past year (comparing June 2013 to a year earlier).  That’s compared to a 5.3% gain for all want ads. Some of the big gainers include graphic designers (as I pointed out here) and film and video editors.

The answer is yes, with a caveat. The caveat: There’s a glut of solar panel production, so now is not a good time to be working for a company making solar panels. But, as a Reuters article wrote:

… the same price decline that has hurt panel manufacturers has helped sustain demand in the face of disappearing subsidies. That means a number of businesses, such as those that install household solar equipment, continue to thrive.

Moreover, the low interest rates make it easier to finance solar installations. As a result, we are seeing sharply rising demand for solar installers and solar sales representatives.  Over the past year, help-wanted ads  for solar photovoltaic installers has risen by 20%, and ads for solar sales representatives are up by 27%.  Help-wanted ads for solar thermal installers are up by a startling 61%, though that’s off a small base. Conversely, want ads for solar energy systems engineers are down over the last year, showing the overcapacity on the production side of the solar economy.

It’s possible that the gains for solar jobs may temporarily shrink if interest rates rise. But it seems pretty clear that solar installers and solar sales representatives are key examples of emerging occupations.

It’s a good time to be a graphic designer–if you’ve got the right skills. The number of want ads for graphic designers has risen by 22% over the past year, practically shooting right off the charts.

What types of skills are needed? Roughly one-third of the want-ads for graphics designers include the word ‘web.’  Graphics design has turned into an emerging occupation,  driven by the tech boom and the very different needs of online/mobile visual presentation.

That leaves two interesting questions. First, is a college degree now needed to become a graphic designer in today’s economy? Second, how easy is it to retool old skills for the new world?